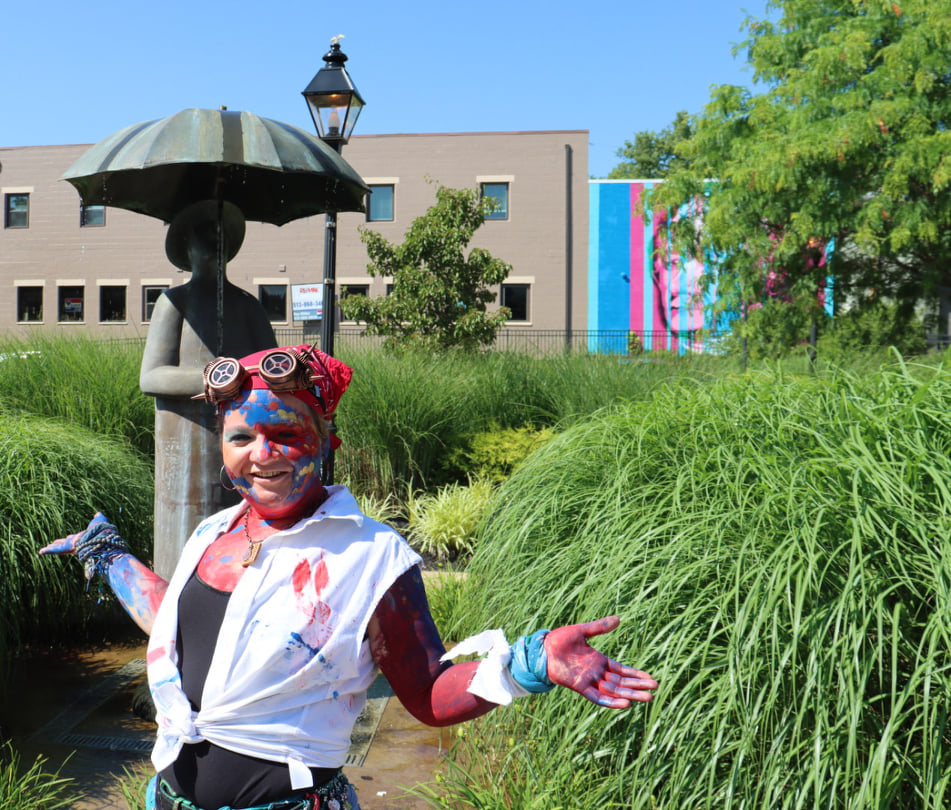 Since we began to open up from the Covid-19 Pandemic, I’ve been hearing about a person in Hamilton that by all means is unusual and noticeable. Not since the “Dancing Trucker” made his debut in Hamilton has there been such a character adorning our streets. Online accounts and videos began to spring up featuring Tara Bridge with her unusually painted vehicle, along with her body paint. She is unusual to say the least. But deciding not to judge a book by it’s cover I decided to sit down with Tara to learn more of her story.

I arrived early at True West on Main Street to await our meeting when all of sudden I began to hear the sound of maracas coming from somewhere on Main Street. Tara was at the light about to turn left, her car stereo was playing a happy song that she sang to strangers as she drove into the lot.

As we made our way into True West we were greeted by some and shunned by others. Tara was in the HOUSE! Tara began to shower love and kindness to every person she came into contact with. Some reciprocated others acted as if she didn’t exist. We made our way upstairs with our True West Strawberry smoothies and I began to record our interview.

I asked Tara to tell me her story. Over the next 45 minutes we smiled, we laughed, we cried. Tara was raised in the Hamilton area. She graduated from Northern Kentucky University with a 4.0 average with a degree in music education. For as long as she can remember she has enjoyed crafty and making things for people. She realized early in her life that listening was a skill that she honed, she said, “ it cost nothing to listen to others.” Life hasn’t always been “a walk a the park” for Tara, she recognized others were struggling with life issues as well. As an expression of her feelings and maybe her artwork, she began to paint her car. She noticed she felt better after she painted it. She began to allow other people to paint her car too. The people she granted permission to paint are those in our city that are struggling with an issue. Tara’s car painting project turned into an art therapy project for people in Hamilton, Ohio.

“I let people paint my car when they are going through hard things. It’s simple to listen to someone, so you see, I listen as they paint”

At about this moment in our interview a lady and her daughter caught Tara’s attention.

“Good morning, I like your blouse!” stated Tara to the stranger.

“Good morning, I like your outfit. This is how the world should be.” declared the stranger to Tara,

“ You don’t know me and I don’t know you!” and a stranger named Beth introduces herself and daughter to Tara.

“ We meet some nice people in Hamilton, and it’s always a blessing.” the stranger replied.

After introductions and very kind words Tara and I continued with her interview. Our new found friend “Beth” enjoyed breakfast and coffee with her daughter.

As we settled back into the interview Tara stated

When asked if she had a message for Hamilton?

“ I love this City, I love every person in this city. The homeless and the rich man. I love everyone!”

The Hamilton night life has seen Tara perform karaoke at Lounge 24 , located 24 S. Second Street. An eclectic lounge with a chill vibe, located in downtown Hamilton. Live music on Fridays, Karaoke on Saturdays. Local craft beers, an extensive bourbon list, specialty cocktails. To date, she has raised several hundred dollars in donations to Pathway to Hope by accepting donations for her karaoke performances.  Tara posts her songs and more on her YouTube channel.