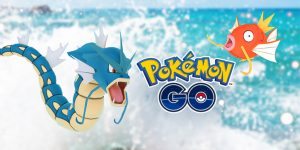 Have you caught many of the Gen 2’s since it was released? Niantic started an event today and They’re calling it the “Water Festival,” and what that means for Pokémon GO   is that there are going to be a lot more water Pokémon around.

The specifics? The event kicks off today and runs until March 29th. The announcement has a few details on what players might find during that time.

– The three main Pokémon spotlighted are Magikarp, Squirtle, Totodile and their evolutions, meaning Gyarados, Wartortle, Blastoise, Croconaw and Feraligatr (Lapras is also hinted at by name as having increased spawn potential. even though it is an ice Pokémon.)

– Swag out your avatar with the new Magikarp hat you can buy for Pokecoins.

Pssst…Kid, Wanna be the very best? like no other was before?

Check out these groups