If you are like most you are amazed by the Loyola Ramblers season. The Men’s NCAA final four is set and there could be a 55-year cycle in place. Did you know there is a Butler County resident that played on the 1963 championship team 55 years ago? Here is his Loyola-Chicago story.

Growing up in Hamilton Ohio Dan Connaughton was a young athletic Catholic kid that attended St Peter in Chain School. After finishing his time at St Pete’s in Hamilton, Dan’s father decided to send the young Connaughton to St. Xavier High School in downtown Cincinnati. A decision that didn’t sit well with the Dan but later proved to be a positive decision.  While attending St. Xavier High School Dan took to basketball. His 6’2 frame and quick thinking on the basketball court made Dan a stand out in the Cincinnati area. His high school playing days had come to a close and the only thing left was the awards banquet. By luck or providence, Loyola University was scheduled to play St. Xavier University in Cincinnati and Coach Ireland (Loyola’s Head Coach) was invited to the high school basketball banquet. Introductions were made and before long Dan had a scholarship to Loyola University in Chicago

The racially charged 60’s spilled over onto the basketball court. In those days there was a “gentleman’s agreement” among coaches and universities to limit the how many black players could play in the game. Loyola University was known to start up to three black players. There were a few Universities that restricted their teams from playing against any black opponents. Loyola University black teammates had to stay in different hotels than their white teammates. Dan recalled times during games that fans would shout racial slurs and throw coins on the court directed at black players. Loyola finished the 1961-1962 season losing only one player, a guard. The team had talent and desire heading into 1962- 1963.  The Championship season was magic. Loyola University was a top-ranked team that made it into the final four. Beating Duke University allowed the Loyola Ramblers to play top-ranked University of Cincinnati in Freedom Hall, Louisville KY. Down by 15 points with seven minutes left in the Championship game, Loyola figured out a way to tie the game in regulation. Mind you, Loyola battled back without the use of a 3-point shot and a shot clock. Neither were part of the rules in those days. The National Championship game headed into overtime. The point lead traded back and forth in overtime until a last second tip-in by a Loyola player. Freedom Hall erupted with shouts and applause, Loyola University became National Champions! Dan Connaughton was part of a National Championship team.

For more news and events in Butler County visit https://butlercountyoh.us 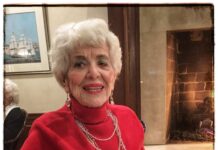