Retired Middletown Division of Police Chief Rodney Muterspaw loves Middletown. He has always been committed to serving people and making their lives better. At age 50, after a 30-year, distinguished career in law enforcement, Muterspaw retired from being the chief of the Middletown Police Department on November 15, 2019. He quickly began taking real estate courses in November. Now, he is a real estate agent for Berkshire Hathaway HomeServices Professional Realty Middletown office and he continues to serve those in Butler County.

“It’s just nice to have a normal life if there is such a thing,” he says. “…When you’re the chief, there’s no break. I don’t care if you’re on a cruise in the Caribbean. I say that because this happened to me. You’re going to get phone calls from council, and the media. That’s just the way it is.”

One of the first things Muterspaw did once he retired was to take a vacation to Las Vegas with a close group of friends over the New Year’s holiday. He’s also been able to spend more time with his four-year-old, twin granddaughters.

“I can pick them up from school more, they can stay all night on weekday nights now, and different things like that, which I never had before,” he says.

“One of the most satisfying or most rewarding things is the work I did in special operations as the supervisor there. It’s the drug and vice unit. We took down some massive dealers from all over the country and from Mexico, and different places like that and put them in federal prison. That was probably the most satisfying work of my 30-year career, because those cases are so hard, and they take years to do. So, when you do accomplish getting them locked up, and getting that fentanyl, heroine and cocaine off the street, it makes it all worth it,” he says.

When he took over as chief is when the heroine epidemic hit. He says the heroine in Middletown was out of control. It was all over the surrounding counties. The Middletown Police Department joined with other task forces to do everything they could to combat the problem. In working with BURN (Butler Undercover Regional Narcotics) and other officials, Chief Muterspaw saw drug overdoses decline significantly. Deaths decreased and the police department worked with the courts on diversion programs.

“We took a whole different approach, where for the first time, we totally consolidated with other agencies…We totally changed the game. We went full enforcement mode and joined all of these other networks of law enforcement,” he says.

In Muterspaw’s position as police chief, he brought a whole new level of transparency to the role. He forged strong community relationships with those in the city.

“I loved my time as the chief, and I think during my time as the chief, the most satisfying thing was the development of the people (in the department.) We changed everything in that whole department, the whole culture, everything from training to the uniforms and how we hired to how we promoted. It was just a really satisfying thing that needed to be done. We basically took the department into the next century,” Muterspaw says.

“I’m a big believer of equal opportunity, not equal outcome, so I wanted to give everybody an opportunity to succeed, where they haven’t been given that opportunity in the past, and what they made of it was on them, but that’s something we definitely changed, and I think the department will continue to do that in the future,” he says.

During his tenure as chief, Muterspaw made tremendous strides in the transparency and community involvement, which the police department has been widely recognized for. Staying close to his roots, his colleagues have always said he has been devoted to making Middletown a great place to live, work and play.

“(Most people don’t retire at 50.) I try to tell people, it’s like being a schoolteacher. Thirty years in police years is really like 50 years anywhere else,” he says, “It beats you down mentally. My last year as the chief, I loved the place, but it was time for me to go…and being young, I wanted to do other things. Fifty is not old, and other careers awaited me. There were other things I wanted to do. I miss the people, but I don’t miss the headache of the job.”

Muterspaw announced his retirement last summer and planned to retire at the end of the year. He started taking real estate classes in November.

Muterspaw has received countless awards throughout the course of his career, including the Middletown NAACP Award for Leadership, Martin Luther King Drum Major Award, Kingswell Impact Middletown History Maker Award and the Middletown Way Award. In 2019, he was invited by United States Representative Warren Davidson to attend the State of the Union address Washington D.C.

“There were a lot of awards an things like that, but that’s because of the work that the department did, not (just) me, and I’m going to tell you that right now, because we had the best, but I was really proud of the Martin Luther King Drum Major Award that I’ve received from the Middletown Area Ministerial Alliance. I’ve also received some awards from the NAACP, which was awesome,” he says.

“I’ve gotten a lot of awards and things like that, and I appreciate them, but I think the coolest thing was when I was asked by Congressman Warren Davidson to go to President Trump’s State of the Union. That was awesome to sit in there with the President. That was one of the best things that I’ve ever done. To me, that meant a lot…It’s things like that – that I’m really proud of, and it’s because of the work we did, and every award that I got is because of the work that the Middletown Police Department did as a whole. I’ll be the first to tell you that,” Muterspaw continues.

He has also served on the Butler County Chiefs of Police Association and the Butler County Safety Council Executive Board, but early on, when he started college, Muterspaw says he wanted to be a math teacher and a basketball coach.

He and his wife have raised their three children in Middletown. Muterspaw has kept a commission through the Butler County Sheriff’s Office (the place where he got his start when he was 20-years-old.) So, he will remain an (inactive) certified police officer in the State of Ohio. 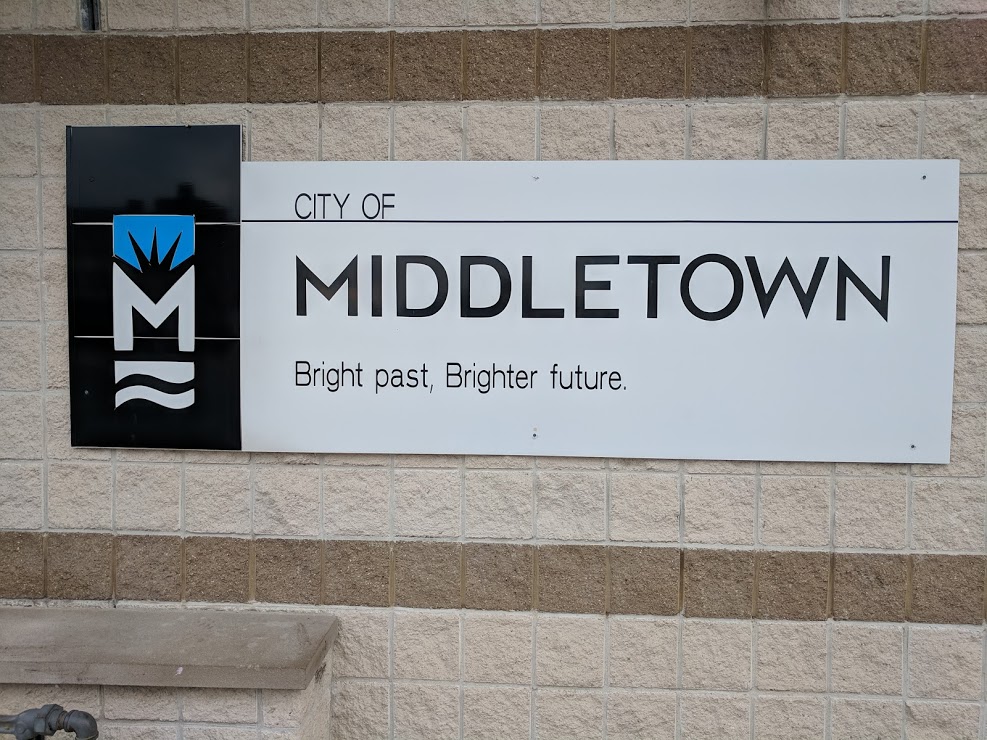 Many citizens have thanked Muterspaw for getting them involved and keeping them informed. Social media and being out in public have been beneficial in bridging the gap between the police and the public.

“With social media, being out in the public, speaking at places, and doing presentations, we basically included the community in everything, because it’s the community’s police department. It’s not ours,” he says.

Under his leadership, the department was a community-oriented police department. Officers, dispatchers, and corrections officers were at everything, including standing outside a school making sure kids got on the bus okay, or cleaning up neighborhoods to “Coffee with the Cops” at Triple Moon Coffee Company, among other functions.

“It’s that community relationship, and it falls into what I’m doing now with Berkshire Hathaway. It’s great because all of these people I know are calling me for business,” he says.

“I can’t tell you how much trust that built, so when somebody had a complaint with the police department, I had an open-door policy, where they could come in and directly talk to me, and say, ‘here’s my issue.’ They didn’t have to go through 10 different people to try to find out the solution. The open-door policy was huge. What we did in the community, that’s what I’m forever proud of the most,” Muterspaw says.

Muterspaw says likes the job flexibility and the fact he can still work with people. He also learned a lot from his own experiences, buying and selling homes. As a police officer, he easily put in about 50-60 hours a week and was available 24/7. His whole life revolved around his police schedule.

“This is something that’s perfect for me. I love doing it,” he says. “The calls that have been coming in have been awesome. I have an opportunity to interact with many of the same people I dealt with when I worked as the chief. I think they trust me and they know I’m not out to make it difficult, and I think that’s why I’m getting so many calls. I appreciate it, sincerely,” Muterspaw says.

So far, he says the job is “enjoyable,” and “it’s a relaxed atmosphere,” and he loves “the no-pressure approach.”

“I’ve already helped a couple of people, who normally couldn’t have gotten into a home. I’ve already started the process,” he says, “…It’s good to see people end with a positive result, and that’s what you do when you help somebody find a home. I like doing that. Plus, I know everybody in this area, and that really helps.”

In his free time, Muterspaw attends sporting events, and remains involved in the Middletown community through philanthropy and giving back in other ways.

“The future’s bright here. It really is,” he says. “…It’s a good time for a change, and I think you’re going to see positive change here. It’s a great place to live. It’s a good place to be. I’m a big fan of Butler County, and Middletown is a big part of that,” says Muterspaw.

“David is a great pick. He’s going to do some wonderful things at the department. He’s a community guy like me, where he is going to be out in the public a lot, and he’ll involve the community…I think he’ll make his own niche. He’s going to be good,” Muterspaw says.