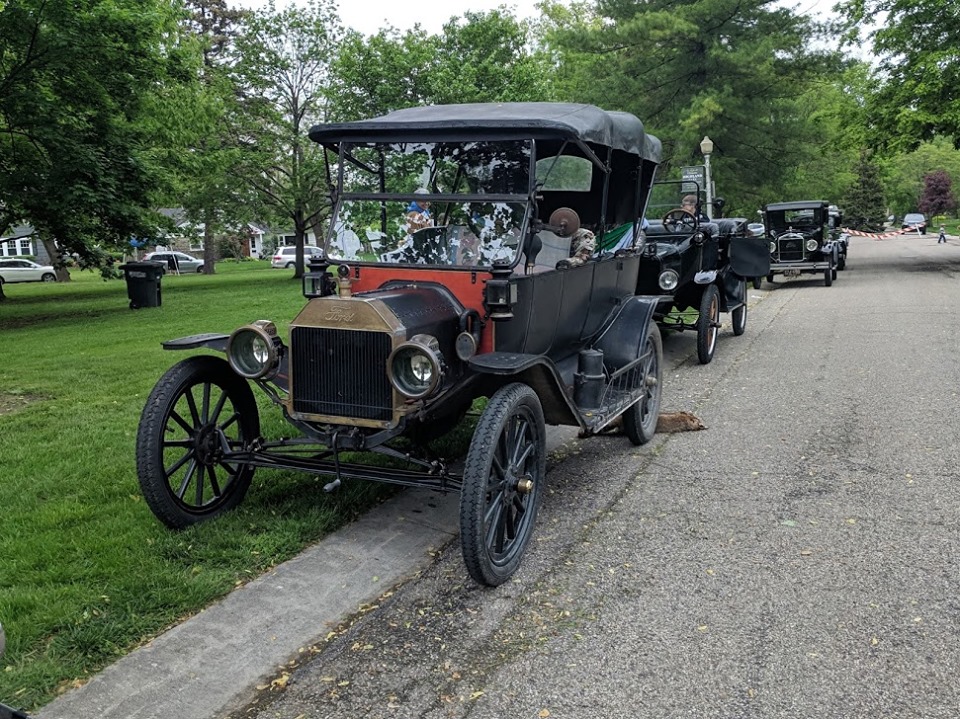 In 1918 Hamilton Ohio was chosen as the site for a new plant for Henry Ford and Ford Motor Company. Henry Ford had business connections to Hamilton through the Hooven, Owens, and Rentschler & Co., this Hamilton company built massive gas steam engines that Henry Ford used to build Model T’s. The new plant caused a demand for housing in Hamilton and in 1919 two neighborhoods were developed, Highland Park and Fordson Heights. On Saturday, May 4th, 2019 Highland Park neighbors and friends gathered to celebrate 100 years of community and neighborhood.

Greg Irwin:                         Highland Park is a really special place for my family, my grandparents bought a house in 1929 there and my wife and I been there since 1986, and it’s just one of the most special neighborhoods I really believe in the world. And who better to say it more than Pat Moeller, a few years ago he said let’s do it, the centennial it was your idea Pat.

Pat Moeller:                       Listen this is one of the best, if not the best neighborhoods in the entire city. When we talk about Hamilton, we’re always probably talking about Highland Park, if somebody wants to invest here we tell people hey drive through Highland Park, see their homes, see how well they’re maintained and this is a beautiful park here. You’ve got matured trees, see a lot of children, and see a lot of dogs, that’s what it’s all about in it when you think about it. But it’s great to celebrate 100 years, but also celebrate the spirit of Highland Park. Whether it’s the five K’s through the streets of Highland Park on Thanksgiving Day, whether and I found this last year one of your streets had some Christmas lights over the middle of it, I would say thank you very much.

I got out of my car, took a picture of it, I’m not sure if it was against the law but I don’t care because driving through a neighborhood it was like it’s a wonderful life all of a sudden, he had lights all over the street and I just really loved that. But the spirit of Highland Park is also people walking their dogs up and down the street, coming through the park here, husbands, wives, grandparents, grandchildren just walking being pedestrians in a beautiful neighborhood. So on behalf the City of Hamilton congratulations on 100 years, this place is just beautiful, thank you for maintaining the homes here because this is truly a treasure, this neighborhood is a treasure so thank you Highland Park, thank You committee.

Greg Irwin:                         Thank you, we would like to have Joan Crane come up just say a few words, and also take this time if anybody from Highland Park has a quick one-minute memory or a thought, good luck whatever come on Joan. When we first started talking about it Joan had so stories, you’ve been here for a long time right and you are the best Highlander.

But Andrew you want to say something? I think it’s great, I think we got keep on doing activities like we’ve done in the past with our moves and all that sort of thing. I think it’s not that expensive to do things like that and have little picnics and get together and keep up the Highland Park.

Joan Crane:                        My sister Susan Meyers has been so active in all this she’s on Jamestown and I think my niece Ann Miles was going to drive her around because she’s really a historian and know so much of the history of the Highland, she’s better than I am in all that.

Andrew Crane:                  I think they’ve planted more trees here over the years because we played so much football down here growing up; they wanted to thwart that, so we tore up this place. Anytime it rained it was muddy, we’d come down here just to play football and get as muddy as we could, and the parents would yell at us, Rob and I were reminiscing about that so. But yes growing up in this neighborhood was terrific, it seems pretty much the same I love it, nothing much has changed it’s a wonderful place to raise children and I have so many fun memories of living here, so it’s great to be back. My sister’s here too, she may have something no, she’s waving no.

My sister created a newspaper when she was a kid called the Highland Park courier, and I’d love to get on the website on Facebook and share some of it, because it was a great snapshot. I still have all the copies of just life in the 1970s in Highland Park, I mean little did she know that creating that newspaper would create such a great snapshot of those days. And they’re hilarious to read, a lot of them is just interviewing kids in the neighborhood, but also adults and talking about the 1913 flood with my grandma, my mom’s mom and things of that nature. So I’d love to distribute that, if she would ever let me I don’t know.

Andrew Crane:                  It is rudimentary; my sister was thirteen years old when she created it so. We had a pet, was it a pet contest down here in Virginia Park where people just brought their pets down, they had like the oldest pet, the smallest pet and all of it are ranked and they had judges and it was an event here where you’d have a pet contest. And so people brought their mice and their rabbits of course their dogs and cats that’s hilarious, so I’d love for everyone to see that someday.

Andrew Crane:                  All right and all the music and the quizzes and the songs, you know everyone’s favorite movie was Jaws this is the way it was, and you know Billy don’t be a hero all those old songs and things, so anyway thank you.

Greg Irwin:                         Oh come on, oh you know what I forgot to thank all the people who volunteered and the committee, I’m not going to go through names but if you could maybe raise your hands, there’s so many people that came together to make this happen especially Linda.

Linda:                                    My name is Linda and I’m a second time arounder, I was actually raised on Rey Avenue where my parents owned a house since 1944-45 something like that, and my daughter now lives there so it stayed in the family that long. But in the 60s, 70s and 80s I was living at 460 Emerson and we were there for 19 years, I raised my children there and I left for a long time lived in Michigan, Florida and Colorado and I came back here can you imagine that. I always thought about this neighborhood, and I now I live on Highland Avenue, so I just want to thank all of the people on the committee they have worked so hard.

And also, I don’t know if you said anything but unsung salvage was going to be making t-shirts for us, and they were vandalized last night, so if you want a t-shirt we’re giving away 200 you just stop in unsung Salvage on Main Street where marshal electric used to be, you all remember that and get yourself a t-shirt with the Highland Park logo on it, so thank you all for being here.

Paul:                                      Well I think so, I came from 300 miles away, but it was worth every mile I drove here. My name is Paul Hannah Burger I grew up on Marsha Avenue, as did my brother and sister; my parents lived there for quite a long time before they passed away. But I think the other thing to think about a community is not only you know what it means right now and then obviously this is a great place to live, but also the impact of the people who grew up in these neighborhoods and are growing up right now. When I think about people like Cynthia Crane, I mean here’s someone who’s a published author, who’s known internationally for the topic she wrote about, she our own family.