Heroes’ Fund to Raise Money for Veterans in Need 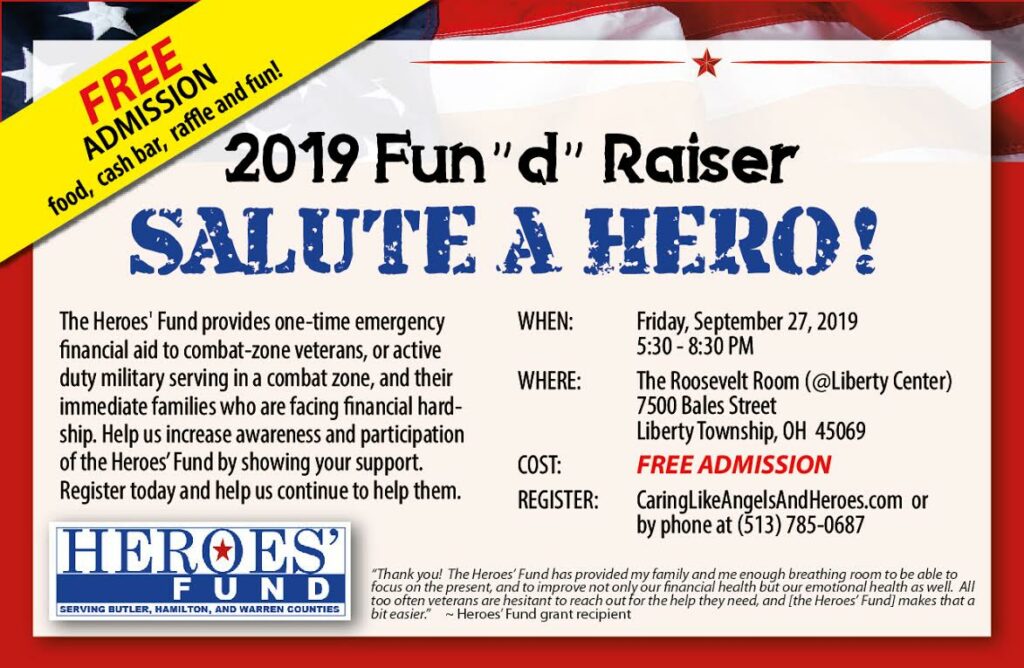 The Heroes’ Fund will host its annual Fun”d” Raiser on Friday, September 27 from 5:30 p.m. to 8:30 p.m. at The Roosevelt Room in Liberty Center. The event will help to provide emergency assistance to area combat veterans, or to active military serving in a combat zone, and their immediate families who are facing financial hardship.

Heroes’ Fund provides one-time support to veterans in Butler, Warren and Hamilton counties, said Bill Lack, chairman of The Heroes’ Fund and co-chair of the board for Caring Like Angels & Heroes.

“One hundred percent of the money that we raise goes to either directly helping veterans or outreach to educate veterans about The Heroes’ Fund. Everyone that is involved with The Heroes’ Fund is a volunteer,” Lack said.

“Since The Heroes’ Fund was created, more than $150,000 in grants have been awarded to combat zone veterans and their families in Butler, Warren and Hamilton Counties,” Lack said.

The Heroes’ Fund can help with needs such as a car payment, insurance, medical bills, utility bills and financial emergencies like getting behind on rent or a house payment. Those seeking aid must also first go to the Veterans Service Commission in their respective counties.

“It’s one of these charities that you wish there wasn’t a need for, because nobody wants our veterans to struggle, but you’re glad to be a part of something that can help them when it’s needed,” Lack said.

In the past, the event was a more formal, dinner fundraiser, but the fundraiser took on a new format last year.
“We really wanted to do something a little more informal, so we tried to turn this into a party,” Lack said. “It’s more about having fun and getting the word out about what The Heroes’ Fund does than it is completely about raising money.”

He said the event is another way people from the community can show their support and help veterans in need.

“It’s easy for me to say as a Navy veteran, but everyone our committee would probably say the same thing. There’s no one we owe more to than we do our veterans, especially those that have put their lives on the line for our country and to keep us free. And that’s what we’re doing, we’re trying to pay back those people that risked so much for us, and this is a way that everybody can help. Come out, have a little fun, spend a couple dollars and raise some money to help veterans in financial need,” Lack said.

The event is free, but proceeds from food, drink, and raffles will go back into the fund. The Roosevelt Room (inside Liberty Center) is located at 7500 Bales Street in Liberty Twp. For more information, or to donate, go www.heroesfundoh.com, or call (513) 785-0687.