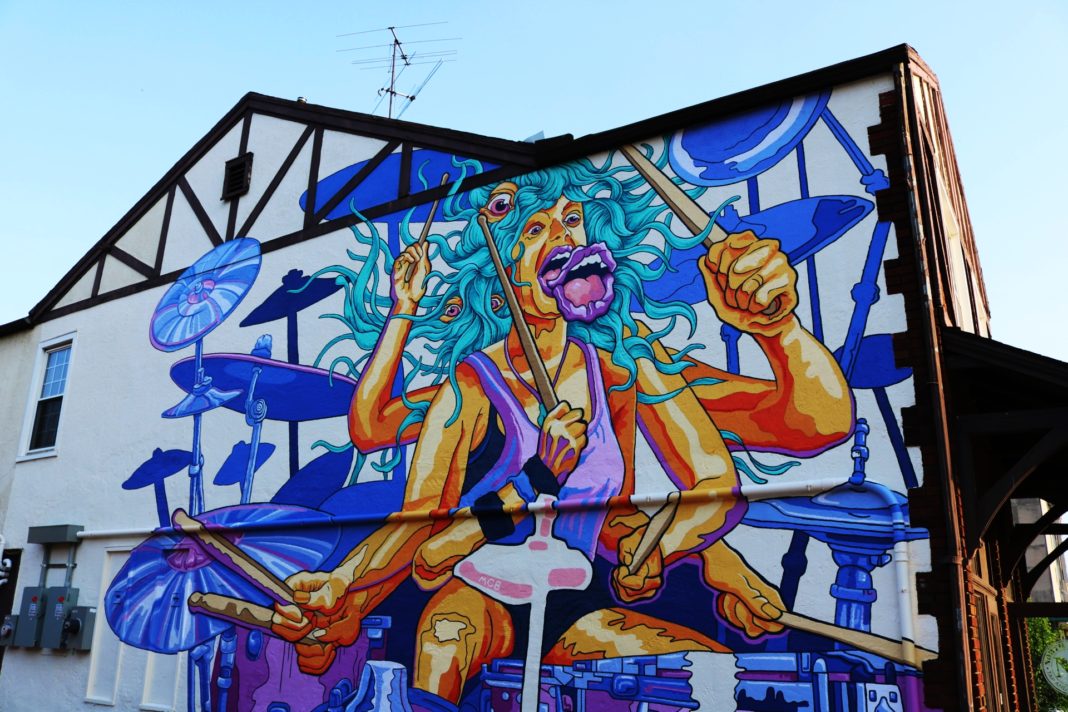 Many Hamiltonians gathered around North Second Tap and bottle Shop tonight, for the second mural celebration this summer here in Hamilton, Ohio! This is the second installment out of three from StreetSpark’s Summer Murals.

“Golden ethos” is located on the side of North Second Tap and Bottle Shop on 134 N 2nd Street, in downtown Hamilton. Designed and painted by the lead artist Christian Dallas, and his team Ciarra Craft and Mark Hanavan.

“Brightens up your experience as you walk and drive by.”

The lead designer and artist Christian Dallas was unable to make the celebration tonight here in Hamilton, so Mark Hanavan spoke on his behalf.

This is Mark Hanavan’s second year with StreetSpark. Last year he helped with the painting of the Joe Nuxhall mural on Clark’s Sporting Good’s building located on 15 S B Street. While talking to the lead artist Christian Dallas, Hanavan learned that it was very important to Dallas to feature a woman in the role of drumming, which is a role usually male-dominated. He also stated the arms in the mural is actually a pictorial device to portray energy and motion.

Also on the team of painting “Golden Ethos” was Ciarra Craft. This is Craft’s second year with Street Spark, as well. She helped paint the “Taking Flight” Mural at Rotary Park in downtown Hamilton.

“Street spark is such a special thing for this community, and I think a lot of people appreciate it- as a young artist, I think its really awesome that I get to connect with these older artists and learn so much from them. As a Hamiltonian, I think it’s really special that I get to work towards the betterment of my community.” 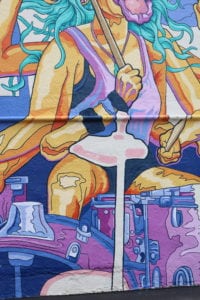 Mark Hanavan said that while painting the mural- every morning the owner of the building Dan, and his uncle John would come out and say hello to the artists. Before leaving each morning, they would yell to the artists “Needs more cowbell!”. A famous quote from the SNL skit “More CowBell”.

Mayor Pat Moeller stepped up to the podium to thank everyone involved in the process of creating this mural. He went on to say that this is one of the best things the city has done, in the past few years. Adding a splash of color and a splash of excitement to the streets of Hamilton.

The next and final Mural celebration of the summer is happening on August 30th at 4:30 pm. “Paint the town Red” is on Miami University-Hamilton’s building located on 1601 University Boulevard in Hamilton