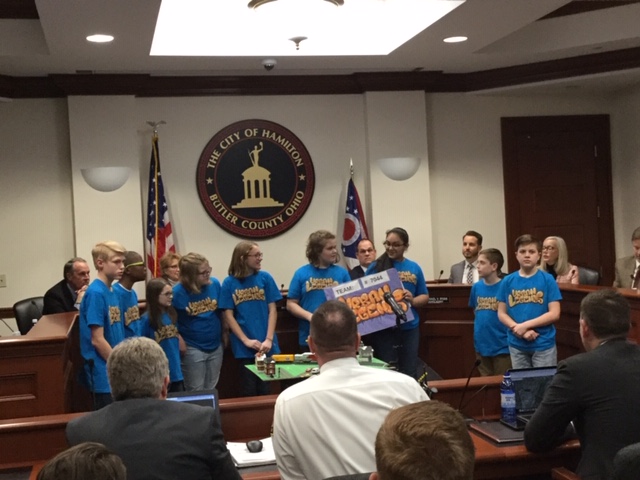 HAMILTON – Residents in attendance at Hamilton’s recent City Council meeting were treated to some impressive special presentations. Among them included the recognition of Americorps members who recently donated $18,000 worth of labor to elderly or disabled homeowners in Hamilton as well as the presentation of a City of Beavercreek Proclamation commending City Staff and Council for providing aid following their recent tornado disaster. However, by the end of Wednesday evening’s gathering, it was neither of these that left the audience speechless but rather a group of local elementary students who provided a creative solution to an all-too-familiar problem.

Urban Legends is comprised of a team of students from Brookwood Elementary that participate in First Lego League, a global robotics competition. First Lego League directly engages youth ages 9-14 in theme-based challenges to “build a better future together” using several disciplines including coding and engineering.To date, there have been 40,000 teams involving 320,000 individual participants in 98 countries.

The competition’s theme for 2019 was City Shaper in which teams were asked to identify a real-world problem in their community and provide an innovative solution. “Historically, Hamilton had many factories requiring many trains,” said Maddie, Lead Programmer. “Even though most of the factories have closed, trains continue to run through the city creating a real-world problem”. Their solution? Install ARTIMIS communication signs at each crossing that would be linked to GPS systems at the end of the train indicating the length of time the crossing will be blocked. Through their research, the students found no other system currently in use around the country and believe this would make travel throughout Hamilton more efficient. Being in their sixth year of existence, the Urban Legends team was advised by a competition judge to patent their idea.