Matt Pater, the new owner of Arches Saloon has long-lasting roots in Hamilton – eight generations deep. He believes in the community, preserving Hamilton’s history, and that’s why wanted to invest in a business here.

Nestled beside The Arches at 233 South B Street, Arches Saloon is said to be one of the oldest drinking establishments in Hamilton. Formerly known as Classic Rock Café, Arches Saloon has not only been renamed, but it’s already undergone a number of renovations.

“My family has been in Hamilton for eight generations. My father and uncle currently have a law firm in Hamilton, and my grandfather had the same law firm. It’s been home to me for a long time,” said Matt Pater.

Pater and his partner/co-owner, Julie Ferguson purchased the Classic Rock Café in the spring of 2019. The establishment has since been changed over to Arches Saloon, which pays tribute to Hamilton’s historic Arches. “About 15 years ago, I came down to Nashville, Tennessee to start building homes. The housing market was great down here. I have been able to do that for the past 15 years, and I’m still doing that, but I’ve been wanting an opportunity to reinvest back into Hamilton and looking at how to continue my family’s legacy. When I heard Spooky Nook was going in, I thought this might be a good opportunity,” he said.

Pater said he came across the Classic Rock Café (at the corner of B and Arch Streets), which was for sale, and he also bought a few neighboring buildings in conjunction with it. The bar operated as the Classic Rock Café for 26 years. It also operated as several bars before that, dating back to 1903. Pater resides in Nashville and travels to Hamilton every other week to do work at the bar and get things established.

“I figured I would make a go at one of the main corridor passages in the historic part of Hamilton on the approach of Spooky Nook. So, it’s more of a long-term investment,” Pater said.

He continued, “I have a long-range goal for that area. I think as Hamilton starts to regentrify, I would like to be on the entry-level of that.”

He said there are future plans for expansion and further remodeling. Several upgrades have been already completed, and there’s been additional lighting put in around the exterior of the bar.

“We sent in crews immediately to repaint and refresh everything. We’ve been doing things to give it a new look and feel, and replaced some outdated colors and fixtures in the building,” Pater said.

Although the area has struggled with poverty and drug issues in the past, Pater said he hopes to help change things for the better.

“We are trying to work hand-in-hand with the Butler County Sheriff’s Office and the Hamilton Police Department as well as the City of Hamilton, in order to clean the place up, and lift people up as we go,” Pater said. “We’ve tried to provide opportunities for people.”

Pater said he wants to get to know the residents, help build up the area, and he is working with City officials and others to continue to positively impact the community. Several locals have been employed at Arches Saloon, including Cat Malone, who serves as the general manager.

“I don’t want to buy a bar that may have been a hole-in-the-wall bar and just try to pump as much money through it as I can with no regards for the area or no regards for the safety of the area,” he said. “I have embraced the area, too. When I’m there, I make every opportunity to shake hands with my neighbors, to get to know them. I show them respect, and I ask them to show the same respect back.”

Pater said he’s received a lot of compliments on the changes that have been made to date. He gets calls all week long from community members, who want to help out or get involved.

“My intention of this bar is not to be a sports bar, but to be a bar that pays homage to the history of Hamilton,” Pater said,

He said he wants to honor the history of Hamilton by putting oversized, old black and white photos on display or placing antique pieces from Hamilton throughout the bar. The historic preservation is an important part of the plans.

“I love the fact that I have a place that I can not only offer as a place for people to come have fun, but a place that eventually is going to be a really big homage to the history of Hamilton,” Pater said. “I’m really excited to tie all that together in a way that can carry on the heritage and the history of a town that has meant so much to my family.”

Built before the Civil War, The Arches are a historic landmark, which were originally built as a 665-foot viaduct. During the 1913 flood that swept through Hamilton, The Arches remained intact.

“I remember as a kid driving through The Arches, just thinking, ‘Wow, I hope we don’t hit them,’ but now when I see them, I see the beauty in them. They just need to be brought back a little bit,” Pater said.

Arches Saloon is open Tuesday through Saturday. Closed Sundays and Mondays. For the latest news and updates, visit Arches Saloon on Facebook at https://www.facebook.com/pg/thearchessaloon.

“We’re inviting the people of Hamilton to come and check us out. Come and have fun, and know you’re in a new type of facility than what was there previously. Give us a chance,” Pater said. 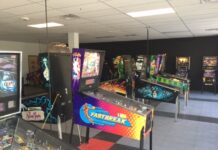 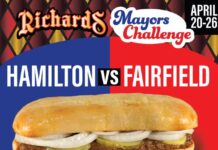 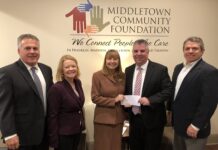